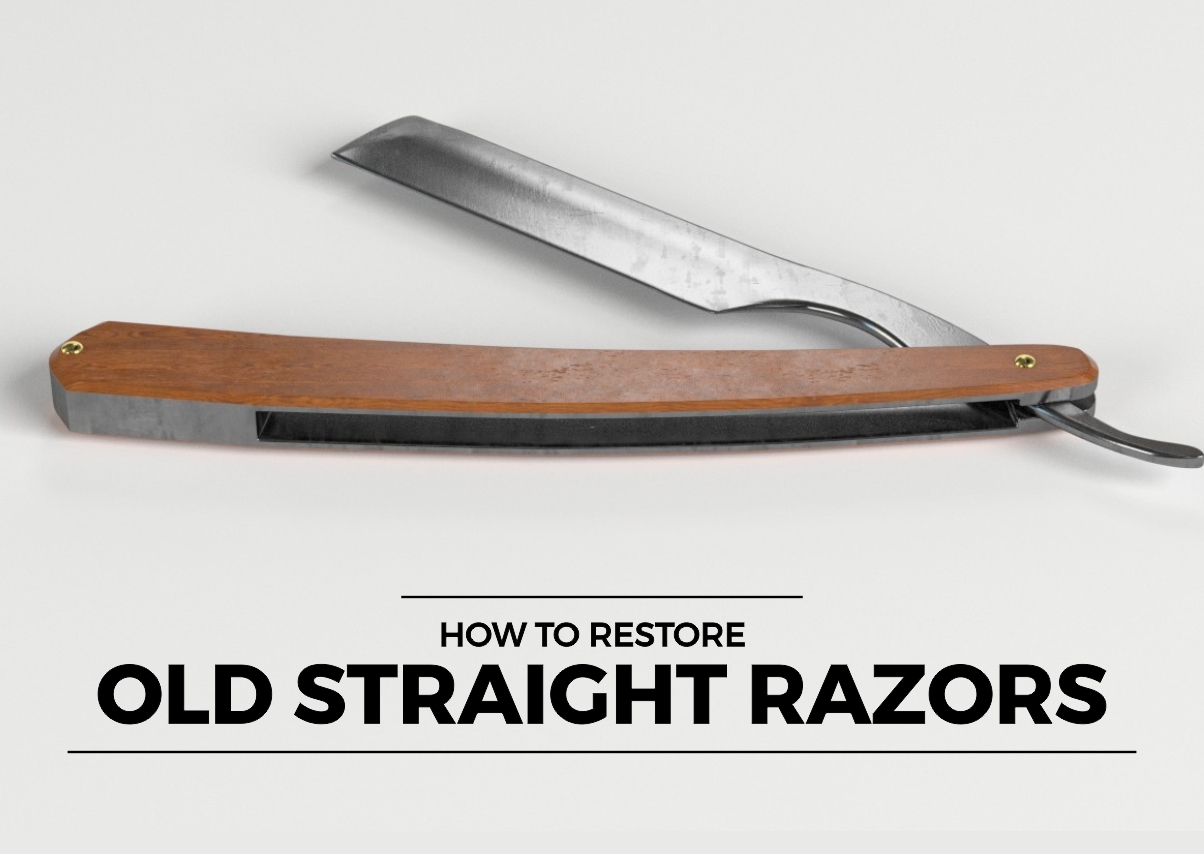 Shaving using a straight razor is as manly as it gets. What’s even more manly is to be able to restore old straight razors. The sense of accomplishment you get knowing that you’ve taken something that someone had previously considered to be junk and brought it back to life is an irreplaceable feeling, not just with restoring old straight razors but with anything.

So, the question is, how do you restore vintage straight razors?

I’ve written this article to provide you with a comprehensive list of steps you should follow when restoring old straight razors.

How to Dismantle A Straight Razor?

The first step to restore old straight razors is to dismantle them. You have two ways of doing this.

As a beginner, the easiest way to unpin the scales (the razor’s handle) is with a pair of flush cutters. Lay the flat side of the cutter onto the handle and force it in-between the washer and the scale, and pop the pin out.

The second method requires investing in a Dremel, hammer, and a drill press. Seasoned restorers have access to this equipment as they tend to restore blades that are too difficult for beginners or hobbyists to handle. Blades that have hardened rust and dirt collected on the scales and around the pin make it almost impossible to squeeze the flush cutter in to pull out the pin.

The Dremel is used to shave off the hard rust. Next, you use a hammer and nail to push the nail out. If you cannot use these tools successfully, you can always use a drill press to push the pin out.

It’s important to note that if you feel the blade temperature warm to the touch, it’s essential to dip it in a glass of ice water to cool it down. High temperatures can harm the molecular structure of the blade. You can wipe the blade dry and get back to work.

How To Remove Rust To Restore Old Straight Razors?

After dismantling the razor, the next step is removing the rust, stains, and discoloring on the blade. This Is referred to as the cosmetic restoration phase. This step is essential to ensure the blade ends up with a shiny, reflective surface.

Sandpaper comes in different grit, which is shown in numbers. You start off with a 220-grit paper and go all the way up to 1500 grit. As you start using sandpaper with a higher grit, you will begin to see the mirror finish you are going for. Bear in mind that this process can take well over 2 hours. Make sure to use long strokes so that you don’t end up with an uneven surface.

The second step is to use a mini buffer. Using a greaseless compound on the buffing wheel, you can begin buffing your blade, which will get rid of scratches and other cosmetic defects. You can use the same process for the pins, washers, and scales. Use cotton swabs to polish hard-to-reach places on the scale.

For the final cosmetic step, you need to grab yourself a tub of metal polish such as Mother’s polish. Using a cloth or old rag, apply the polish onto the whole blade until you get a mirrored finish. This should take you about 40 minutes.

How Do You Sharpen An Old Straight Razor?

The next step to restore old straight razors is referred to as restoring the cutting edge of the blade. The cosmetic restoration was for the look and feel of the razor. The cutting-edge restoration is for the functionality of the blade.

Honing is the act of sharpening a straight razor. While restoring an old straight razor, you might notice that the blade’s edge, the part that cuts the hair on your skin, may have a few chips. This is where honing your blade comes into play.

The essential honing kit must include a honing stone, a stone-holder, and a truing stone.

The honing stones are measure by grit, just like sandpaper. They range from 400 grit all the way up to 12,00 grit. The lower the grit, the rougher the honing stone. This means the more chipped and dull the blade, the lower the grit should be. As a beginner, you should start with blades that are not in the worst of conditions. This way, you can get away with buying only the 3000, 8000, and 12,000 grit stones.

This is the technique to hone your straight razor:

– Place the razor flat on the stone, the spine of the blade should face you, and the cutting edge should face away.

– Push the cutting edge away from you along the length of the stone. Do not push down against the stone. Use your non-dominant hand and place a finger on the top end of the blade to stabilize it as you push up.

– Once the blade reaches the top, flip the blade around so that the cutting edge faces you and the spine faces away from you.

– Now, bring the blade towards you.

– Do this till the cutting edge becomes even and has no cuts. It should take about 10-15 strokes.

A truing stone is rubbed onto the honing stone to flatten the surface as it can wear off unevenly when honing a blade.

The final step in restoring a straight razor is to strop it.

A strop is a strip of leather used to sharpen razors. If you already use a straight razor, you should have a strop as it keeps your blade sharp for several months. After honing, a rough patch of steel can form near the sharpened edge. Using a strop coated with chromium oxide, you can take stropping to a higher level. Chromium oxide helps to release the rough fragments (burr) left behind from honing.

The technique to strop is simple. You simply hold the razor against the strop at a 45-degree angle and move it back and forth until you finally end up with a sharp and polished blade.

If you follow all these steps in the order mentioned above, you will most likely have a restored vintage straight razor in your hands.

How Do You Clean A Straight Razor?

If a razor is well taken care of, it can last several generations. Here are a few home remedies that you can cook up to use for your regular blade upkeep.

Simply put, there are 3 main steps to restore an old straight razor:

For long time use of your straight razors, make sure to keep them clean with the home remedies mentioned above.