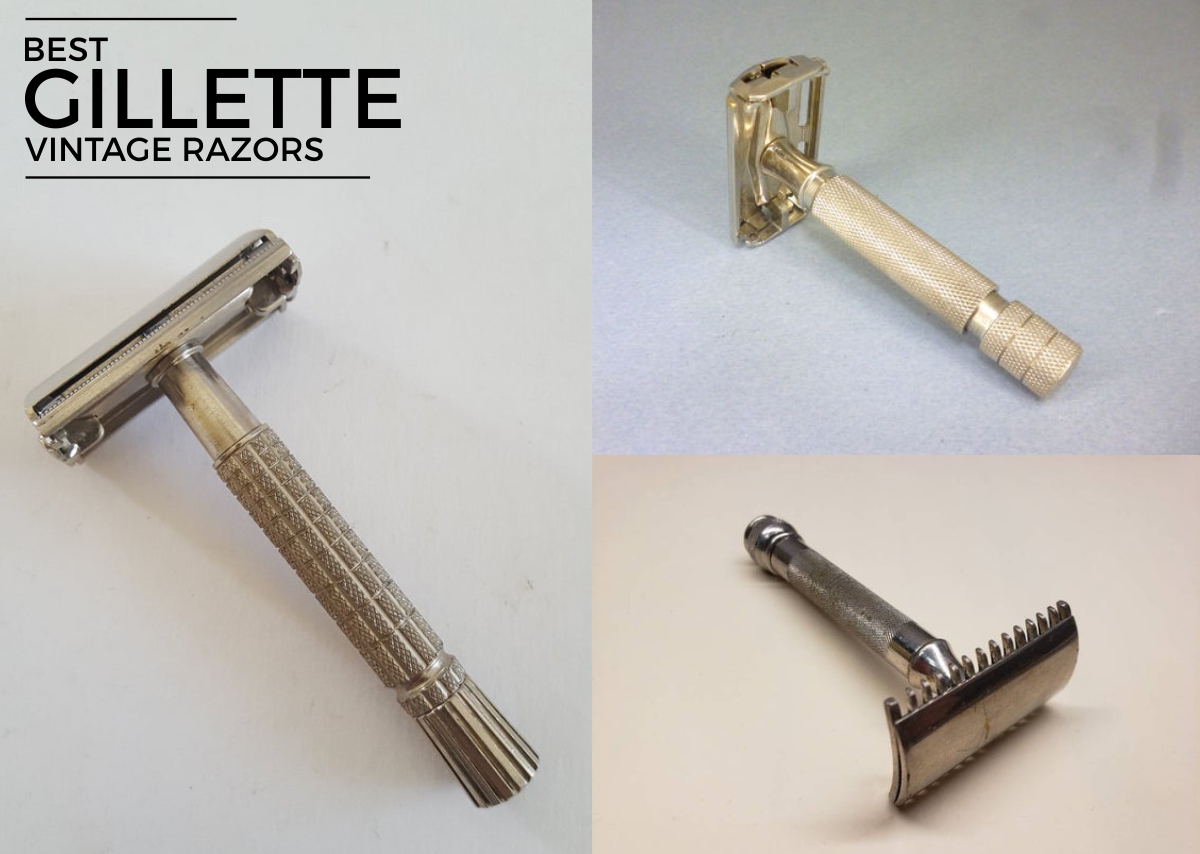 They say the razors best suited to a man were manufactured decades ago. These modern razors don’t make that cut. They don’t give you the same feeling when you hold a vintage razor, gliding it across your face to give you the look you were going for. So, I’m introducing you to one of the best razors out there: here’s a list of Vintage Gillette Razors.

Gillette had made numerous models of razors since 1903 when they first started. Here, I’ll introduce you to the most common and popular ones. Let me start this list of vintage Gillette Razors with a razor that sounds the most vintage.

This was the razor that made Gillette famous. It was their first patent and was manufactured from 1903 to 1921. It consisted of a handle attached to the middle section, which holds the blade and is also called the guard, and a removable cap on top of the blade. It was made in two versions, one of which was the deluxe model, targeted to the rich. The deluxe model also had a cylindrical removable inner barrel that was insert into the handle and could be twisted out.

This razor is characterized by a curved guard, and there are long spike attached to the middle section too, forming what is called an “open comb design”.

Since this razor was made in a time where Gillette was marking its razors with long serial numbers, you might find the serial number on top of the guard, or inside the barrel. There are some tables available on website which help you match the serial number to the date of manufacture, and a quick look at one of them will do the job.

This razor was produced from 1929-1940, in a period where Gillette didn’t label its razors so it might be harder to identify.

However, if you buy this razor as part of a set with its original blades, since the blades of those times were labelled, they could give you an accurate idea of when this razor was produced. It is a three-piece razor, which means it consists of a handle, a blade holder, the guard, and a blade cover.

The mechanism to use it is simple: Unscrew the top, insert the blade, and screw it back again. One additional feature is that it has a slot on the blade cover, that fits into the groove in the guard.

This locks the blade in place. It also has an open tooth comb design, along the guard, which gives a cleaner look when shaving through large amounts of hair. One difference from the previous version is that this blade had a flatter guard.

It is available in various minor modifications. There’s a version where the handle is long and thin, and one where the handle has a ball end. The comb incorporated is also longer in some versions and shorter in others.

While the handle only makes a difference ergonomically, a closed comb gives a more aggressive shave, as it scrapes the skin, while a longer comb is better for longer hair as it combs through longer hair and helps remove them effectively.

I’m giving you a link of Gillette “New” Razors you could buy.

This razor was part of a campaign where you would buy a pack of razor blades and get a free razor along with it. This was introduced for competition purposes, so only “Gillette blades” could fit into a Gillette razor, and such was the case that even older Gillette blades wouldn’t fit into this razor.

It was solely produced in 1931. You might call it one of the coolest looking Gillette razors, as in some of the razors, its top (blade cover) had triangular and diamond-shaped cut-outs. It is hard to spot the decorated top razors in the market nowadays, as most of them are sold out.

However, I’m giving you the link to where you could buy some “Good Wills”.

The Gillette tech razor has been produced from 1938-1979. It was Gillette’s lowest price razor. It was a 3-piece razor. As it was produced through such a long time, it went through various modifications, some of which even had their own names.

To simplify, there were early war Techs, produced during 1938-1945, and post war Techs, made from 1945-1979. If you’re a fan, we’ll tell you a minor modification that will help you identify an early war Gillette Tech. The middle section, or the guard bar, which holds the blade has triangular guard holes, instead of rectangular ones.

The top of the razor, the blade cover, or the safety bars/guard plate has a flatter middle section. Some say that it exposes the blade more which can affect your shaving experience.

We’ll particularly talk about the Gold Tech, which is one of the prettiest Gillette razors you can own. It has the Gillette logo on the front of its top cover, and a knurled handle with a ball on the end. It’s gold plated like the name suggests, and after some cleaning techniques, is restored to its original color!

Here’s a link to buy the gold tech:

The production of this razor started in the late 1940s and continued intermittently till the late 1970s. It was one of the first razors that come with a twist to open design. It’s simple to work with this razor, you loosen the handle by a knob on its bottom, and the flaps at the top will open. This razor is usually labelled using Gillette’s codes so it’s easy to find out where it was manufactured.

Here is the place where you can buy the flared tip Super Speed and the red tip one:

This is one of the most popular razors originally names as “Gillette 195 Adjustable Razor”. It was named as such because its retail price was just $1.95. It was made for three and half years between 1958 (D-3) and 1962 (H-1), where the letter is a code for the year and the number represents the quarter of the year it was manufactured in.

This was a twist to open razor; it had a dial just on top of the handle, which when turned opened its top flaps. Here comes cool feature: On top of the twisting dial, there was another dial, separated by an indicating line. It had numbers printed on it, from 1 to 9. The numbers determine how much the blade is exposed to the skin, with 1 being the lightest and 9 being the most aggressive. Can you imagine doing that with an electric shaver? These vintage safety razors though simply designed got the best work done!

Here are places where you can buy the Fat boy:

Gillette also produced mini razors. No, these weren’t toys, or priced cheaply. They were miniscule razors only 2 inches in height! It is possible to shave with them and many shavers call the experience “something else”.

It was a three-piece razor that came with its own fancy packaging, (which mostly included razor blades) and had its own variations. I have found cases made of leather to pig skin, to a zippered case as well, all minimized for space.

While packaging, you might need to separate the three parts and insert them into their respective slots or some cases just require you to just insert your razor.

This is one of the most unique looking Gillette razors out there, and you’d have no problem identifying this one! We’ll show you the giveaway: there’s a toggle at the bottom of the razor! It is slightly protruding, and changes into five position. Think of this razor as having the twist to open top, without the twisting mechanism. The toggle basically does the work for opening the razor: two positions are for changing the blade, two positions are for rinsing the blade and one position is for locking the blade firmly in place for your shave.

You can identify it easily as it was manufactured in the first quarter of 1958 (D-1) and again for the fourth quarter of 1960 (F-4), so your original vintage razor will come with those codes.

Here’s a link for the toggle razor and another pricier one which comes with its original box:

The aristocrat was Gillette’s first razor with twist to open design. It started production in the 1914, (or even earlier according to some reports) and continued till the 1960s. It was one of the longest running Gillette razors so I can’t even imagine how many Aristocrats are out there! This razor was usually gold or silver plated, and its prices started at about $5 to $50. And let us tell you, with inflation adjusted $5 is about $120 dollars in today’s time, so this razor was made for Aristocrats! There are about seven different types of Aristocrats, so this type is more like a ‘class’ of razors.

Gillette, from 1903 to 1929 would use serial numbers to mark its razors. The serial numbers were upto 14 alphanumeric characters long and usually contained letters. During some periods, for example mid-1927 to mid-1928, there were no serial numbers used. If your razor has a serial number, make sure to look it up on the internet: there are so many sites available where you can identify when your razor for made.

I’ve found a site which the most comprehensive table that lists the codes and dates of manufacture.

From 1930-1949, Gillette didn’t mark its razor but started marking its blades. The codes used were simple: they indicated the date of manufacture. The code was a letter and a number. The letter A indicated production in 1930, B was for 1931, and so on. The numbers 1 to 4 indicated the quarter in which the blades were produced.

As 1950 came, Gillette started marking its razors too, with the same letter and number pattern. The blades were also marked similarly. As the decades passed, some of the codes were repeated as more years passed than there are alphabets in the English Language!

I’m sure reading this would make you want to get your hands on one these razors. I’d say the best place to find them is your family’s attic! If you don’t have access to that, I’d say try searching for them online on Ebay, or Etsy. But, there’s a downside, these razors might be covered in years old shaving foam or maybe you’d find a treasure that is a vintage human hair! But that is nothing to worry, when shopping for vintage razors, aesthetics come secondary, your main question should be: is the guard intact?

Or, are the dials functioning? Your razor just needs to work properly. There are services out there that polish and revamp your razor, and even ultra-sonically clean them. Or, you could choose to buy directly from one of these services, but that comes with a higher price tag.

Choose where you want to get yours and keep your razor as a decoration piece or for an everyday luxurious feel when shaving in the morning. One thing I’m sure of: you wont regret adding one of these beauties to your shaving kit!