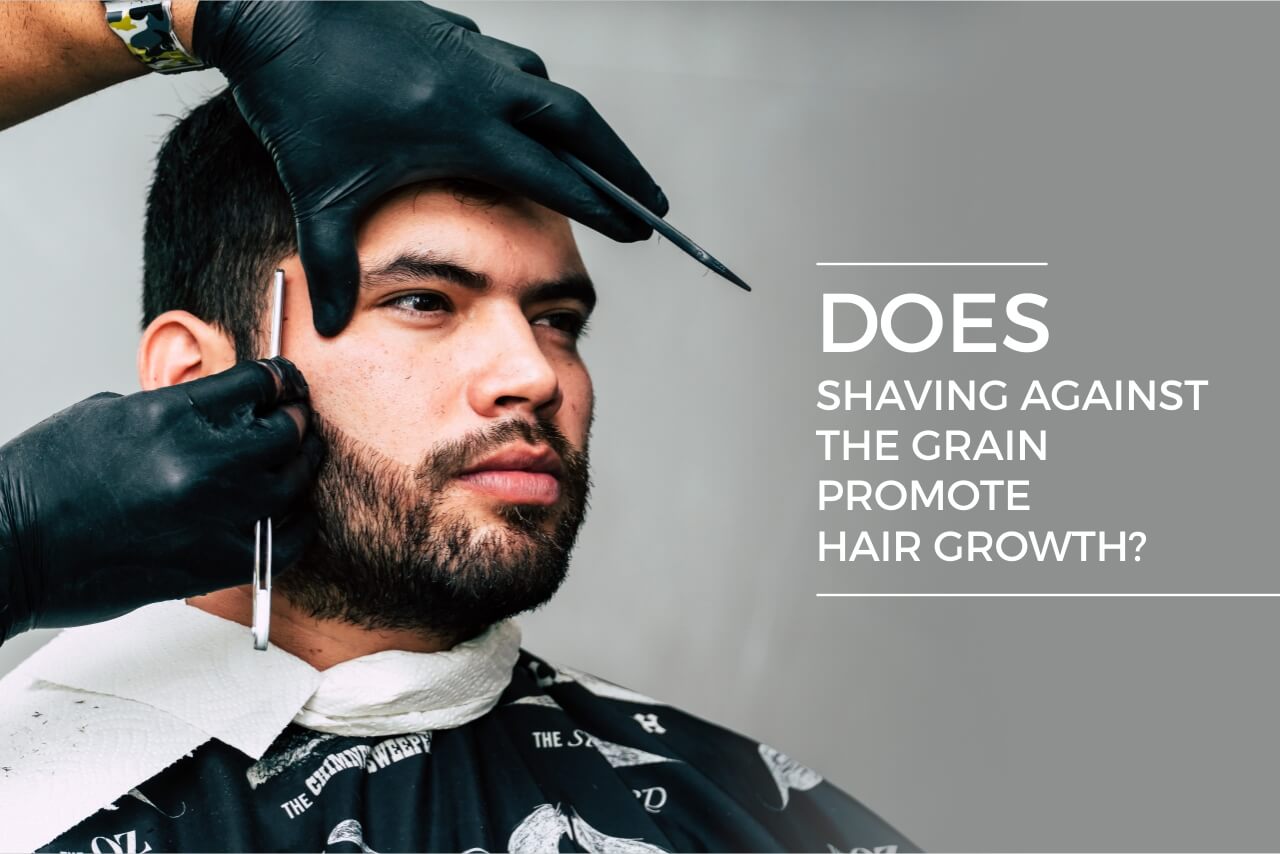 We’ve all been there – does the blade go down the direction of the hair, or against the grain? Both these choices have their pros and cons. If there’s one burning question for shaving, it’s “does shaving against the grain promote hair growth?”

Is it better to shave with or against the grain?

What is the ‘grain’? The grain is simply the direction in which your hair grows. If you’ve been searching articles on the internet on how to shave, you’ll find mixed opinions on whether you should shave with or against the grain.

Like I said before – both these choices have their ‘good’ and ‘bad’. If you were to shave with the grain, you wouldn’t be going for a closer shave (where the hair is cut very short to the hair shaft). On the other hand, if you go against the grain, although you ensure a close shave, your skin is also prone to razor bumps and irritation.

Still, that’s no reason to say shaving against the grain doesn’t promote hair growth. So, let’s talk about that a bit now.

Does Shaving Against the Grain Promote Hair Growth?

I’ve gone through many people saying “shaving” (of any kind) helps promote hair growth. After all, after a few days of a good shave, you’d touch your skin and feel a thick, coarser hair run down your cheek. Love the feeling of it, right?

Unfortunately, it isn’t due to shaving. Regardless of the area, the hair is already thicker at the bottom part of the hair shaft. So, whether you run the razor with or against the grain, there’s going to be no difference in the quality or growth of your hair. Simply because, once the thicker part grows a bit more, the other end will make it thinner and feel softer.

Hair growth is based on your genetics. The texture, regrowth, and volume depend on your gene pool. Other than that, you can aid this process by taking care of your diet, shampoos, and by using supplements which can help promote hair growth.

Now that the myth is out of the way, the question only comes down to: Is shaving against the grain bad?

Well, is shaving against the grain bad?

If you’ve ever tried the “against” method of shaving, you know it’s the quickest ride to a close shave. Unfortunately, you’re also inviting a whole lot of razor burn, ingrown, and damaged hair. Though there’s a chance to avoid this as well.

With a good razor and a firm hand, you can promise yourself a close shave which makes sure you feel your smooth skin again. To get started, start feeling the direction of your hair, and whenever you feel resistance, that’s where you’ve identified the grain. It’ll feel different and even sound different!

Now that you know your hair grain let’s look at how you can avoid the irritation or bumpy feeling from your razor.

To get started, you can begin with hydrating your beard hair. Either dampen it with water, facial scrubs, or a face wash. Next, you can apply a gel or a shaving foam to get the hair wet and a little softer. It can also help you avoid irritation and cuts.

That’s it – you’re ready to get started. So, if you were questioning yourself on whether “is it bad to shave upwards?” – there’s your answer. Keep it slow, hydrate your skin, and always opt for a mix of both with and against the grain to get the perfect shave!

In what cases is shaving in the opposite direction bad?

Although the opportunity seems captivating to go for a close shave – it’s not for everyone. Whether you’re inspired by your dad to go pick up that razor and crush the grain-shave or some other inspiration, not every skin type is the same.

Here’s when you shouldn’t go for shaving against the grain:

1. If your skin type is sensitive

2. If you have thick or hard hair

It’s also better to steer clear of against the grain shaves if you have hard or thicker hair. When you attempt to run the razor against your skin, it tugs the hair out forcefully. This can cause razor bumps, redness, irritation, and even cuts in some cases.

Again, if you’re confused about whether you’re going with or against the grain, start by assessing the growth of hair. When you run your fingers down the hair, you’ll feel a clear difference between the two. Going against the grain is far more resistant and rougher in comparison to going ‘with’ it.

Conclusion: Do you shave up or down?

Let’s sum it all up. “Does shaving against the grain promote hair growth” has only one answer – unfortunately not. It doesn’t, and the growth part depends on your genetics, diet, and supplemental intake.

But is shaving against the grain bad? It really isn’t. It’s a bit hard at first, but start with hydrating your skin, and you’re in for the closest shave ever. So, what’s it going to be for you? Do you shave up or down? Whichever works for you – that’s the best technique out there!

2 thoughts on “Does Shaving Against the Grain Promote Hair Growth?”