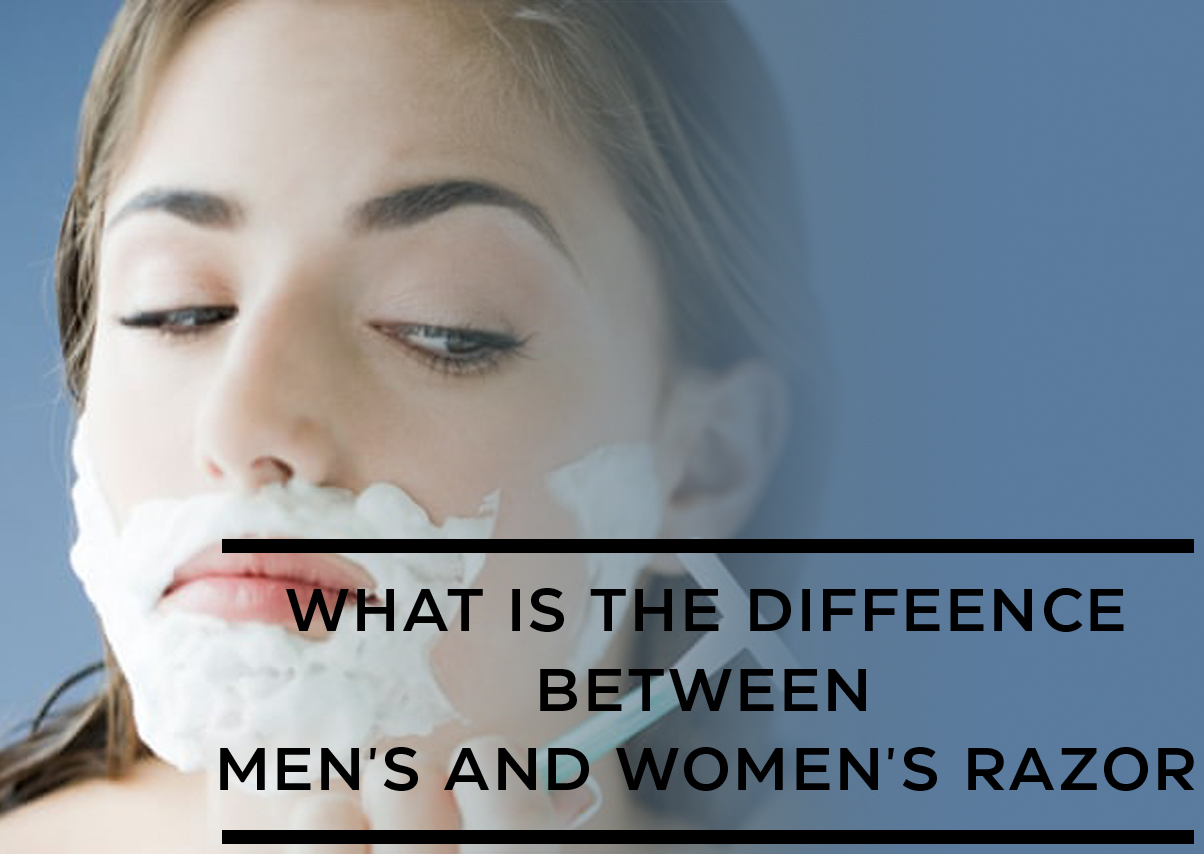 This thorough article sheds light on what is the difference between men’s and women’s razors, why razors that women use are more expensive, and most importantly, can women use men’s razors? Feeling inquisitive? Let’s fuel your curiosity!

Let’s come clean; nothing is more charming than a guy wearing a clean-shaven look. It is vibrant, less aggressive, and attracts those gorgeous señoritas within a snap of the fingers.

The clean-shaven style never goes out of fashion. It’s a score that attractive guys have been nailing in the competitive game of looking good.

In a survey, some shocking disparities have shown that 46% of the men prefer women to go bare, while 30% have a preference for women’s public hair to be neatly trimmed, and only 12% of males love the idea of the landing strip.

Indeed, some women may not prefer shaving their face, but they can’t ignore those legs, pits, and pubes.

So you see—even in the ladies department, demand for going completely bare is high.

Since women don’t find those unkempt and un-groomed beards impressive, along with men who prefer women to go completely bare when it comes to public hair, a cost-effective, enjoyable razor is the tool that brings value in that area.

But can women use men’s razors?

What is the difference between men’s and women’s razors?

We know your mind is flooded with dozens of questions right now, but don’t worry; we’ll answer each one of them.

Difference Between Men’s and Women’s Razors

Are you in quest of the differences between men’s and women’s razors and don’t want to fall into the Internet rabbit hole?

If affirmative, you would find this guide a treasure.

You may have seen that men’s razors have different colors, heads, blades, and handle compared to women’s—and there is a reason behind that.

Regardless of the razor type, i.e., cartridge, disposable, or double-edge, you don’t want to miss out on the differences that lie between men’s and women’s razors, or else you won’t be able to make a well-versed decision.

So, are you ready to dive into the differences that exist between female and male razors?

Well, it’s about time you knew the factors that distinguish male razors from female razors.

Generally speaking, men’s razors are built to be used around the face like cheek, chin, or neck, while women’s razors are meant for the body areas, including legs, underarms, and public hair area.

But that’s not the end of the list; here are other factors:

Women always fall head over heels in love with pink and chromatic colors, whereas men seem to enjoy good vibes of intense color.

Now some razors are multi-colored, and in others, only one color rules the shaving tool. Women may also desire to choose light blue as it symbolizes tranquility.

The colors should be about personal preference; there’s no need to go crazy about them when choosing the best shaving razor.

Other colors that could become a possibility for women are red, violet, and yellow, but pink can’t be beat, ever.

Men’s razors, on the contrary, are generally dark-colored. Most men tend to choose a shaving razor that only features a single-colored body.

Men’s favorite colors in razors include black, silver, dark blue, gray, and sometimes, an orange may work out for them.

While color seems to make a difference, it isn’t the sole factor in the comparison.

This is where things get tricky. Both men and women need to understand the importance of heads in razors to avoid feeling like a fool.

You may have noticed that some razors boast rounded heads while other shavers don’t. Why are some razors rounded?

Well, that’s because rounded edges make it easier to navigate the shaver.

When women shave, the razor travels through different body parts, such as legs, armpits, and even the sensitive zone: the public hair area.

A tiny wrong movement could ruin the game since you’re navigating the razor around the sensitive area.

That is why women’s razors are rounded and a little more prominent in size.

You don’t have to go all at once; go gentle when shaving and make sure the cutting edge is at the right angle to the shaving direction.

The men’s shaving razors—on the other hand—are squared. Some alpha males even believe that they don’t need those bigger shavers, i.e., any small machine will do the magic.

So, next time you go shopping, make sure that you’re investing in the right product.

Tip: To have a closer shave, men can try shaving upwards on their faces.

Another feature that makes women’s razors different from men’s is the strip used to moisturize the skin before the shaving starts.

Also referred to as lubrication, it turns out to be a game-changer. Many modern shaving brands are now offering built-in lubrication.

Since razor outlives the strips, these strips are only for momentary use.

Although not all companies offer a moisturizing strip, you’ll quickly come across one in big brands, namely Gillette, Dollar, etc.

Women’s razors feature more than one strip while men’s shaving machines only have one or sometimes, not even that. That is because women need more hydration as their skin is prone to razor burns.

The moisturizing strip in a shaving razor carries polyethylene glycols (PEGs) or some anti-fungal agents in the reservoir. It is a water-like gel that helps keep the skin shielded against cuts, irritation and even allows the razor to glide smoothly.

The gel is released with each shaving stroke to provide moisture and results in a more harmonious shave.

Therefore, if you’re looking for a women’s razor, ensure there’s an extra moisturizing strip with the blades.

We wouldn’t say that men’s and women’s blades are like chalk and cheese; however, there are some slight differences you don’t want to miss out on.

Women’s razors are oval-shaped that makes fitting into the curves a breeze.

It’s no wonder most women don’t shave their face and guess what—getting a smooth shave is only possible with flex blades when approaching the knees, public hair, and underarms area.

The heads in most women’s razors pivot so that the razor can magically follow the body’s contours. However, most men’s razors’ heads don’t swivel.

A pivoting head is what females need to keep in mind while shopping for a women’s razor. That way, women can also avoid those unwanted razor cuts on their skin.

Of course, you want to and avoid these common shaving injuries.

Tip: If you don’t want to struggle with clogged blades, you may want to consider trimming the hair before shaving.

Now, you may wonder why we are talking about the handles. Well, those handles need some introduction because their aesthetics — irrespective of who is using them — might not be the same.

And since you asked for this, we couldn’t help but enlighten you.

Just like the head, the handles of women’s razors feature rounded shapes as well. Not only does this offer an excellent grip, but also it increases longevity, just in case the razor falls.

On the other hand, men’s razors use thin handles because men find it smooth like butter to shave their faces.

It’s not just about the non-slip handle of the razor; the arc also makes a great deal in this scenario.

While most people find themselves busy shaving their faces, armpit, or legs, only a few of them notice that handle curvature.

Men may shave their face with their eyes closed hands down (although we don’t recommend doing so); women don’t want to block the view when shaving their legs, armpits, or other sensitive parts.

That is why a razor with a larger arc makes a huge difference.

Why are women’s razors more expensive?

Now that we know that both men and women need shaving razors for purposefulness and integrality, we have another question coming up:

One of the reasons why razors made for women are priced higher is that women always get something extra in the bucket.

Take those moisturizing strips; for example, they increase in number while men’s shavers are only packed with one, or not at all.

Research shows that women’s razors are 11% more expensive than men’s.

While some might relate it to discriminatory pricing, others disagree, but we can’t ignore that it is directly tied with “Pink Tax”—a gender-based tax system.

Can women use men’s razors?

If the need arose, can a woman use a man’s razor?

While there’s nothing wrong with men using women’s razors, there are some points that will make you want to withdraw your decision.

The grip may not be a breaking point; other factors can’t be ignored, such as the pivoting head, moisturizing strip, and non-slip grip.

It makes complete sense why women depend on a separate shaver.

Not just that, sharing someone else’s razor could lead to sanitary concerns, and the worst-case scenario—you could put yourself at risk for infection.

So, if you aren’t sure what you’re doing, we advise you to take a step back.

Even dermatologists suggest that sharing shaving machines is not ideal.

It is women’s personal preference whether or not they like to shave their face, whereas men mostly shave their face every once in a while. So, are body and face razors different?

The rule of thumb is that you should always keep your facial razor separated from the body razor; one of the reasons is sanitary.

If women want to use a razor on their face for peach fuzz, they will need a different shaver than what they used for the body.

Razors that feature cartridges are suitable for the body because they include multiple blades, whereas facial razors usually feature a single blade.

First time shaving your body? Learn how to hold a straight razor!

Let’s get it; no one likes to look like a hobo with that scraggly hair on the face. Girls fall for men that look classier with that clean-shaven style. Facial hair may haze over that charm on the front.

There’s no sorcery here. Just the right shaving razor—that’s all!

Why cover your face or body parts with that unkempt hair when you can look younger and sexy?

Take a clue from the differences we’ve laid out above and go shopping for the best shaving razor today.

We would like to know what difference between men’s and women’s Razors as above had you astonished? Please let us know in the comments, and we will get back to you.

Want to take your grooming game to the next level?