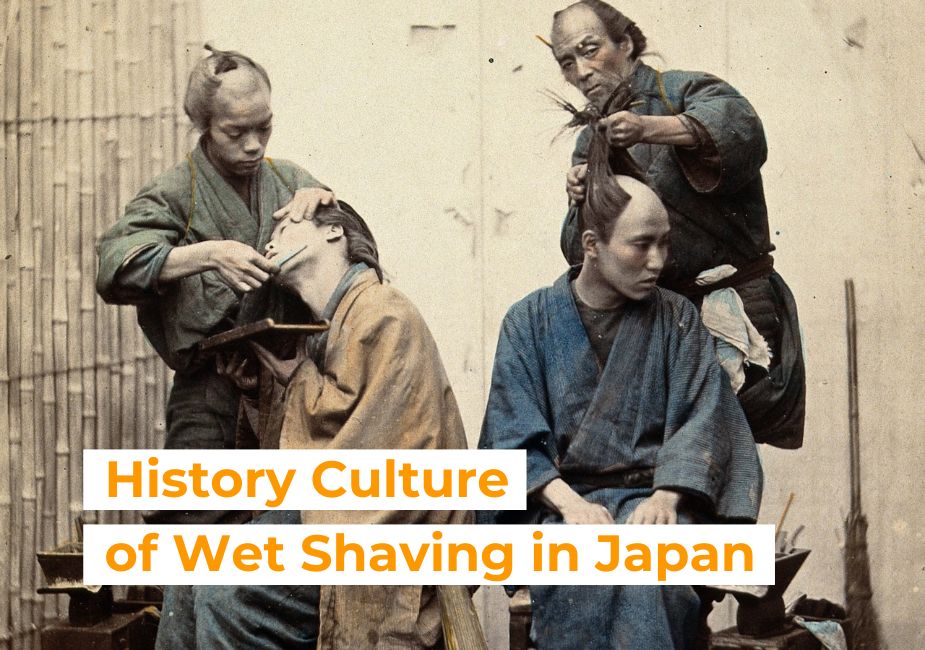 The history of the shave is very old and interesting. The shave’s origin is paleolithic and about 20,000 years old. When they start to use different tricks like the shells with pointed edges, broken sharp volcanic glass, and with the teeth of sharks, etc. for shaving, in this article, we will discuss the different types of razors in the history of Japan and then how they start using them for wet shaving.

Introduction of Razor In Japan

In the Japanese language, they call razor ”Kamisori”. In the old days, the Japanese liked to grow beards. The Kamisori ( Razor ) came to Japan from China. It came with the introduction of Buddhism in the Asuka Era (552 – 645). It was used as the sacred tonsuring taken by Buddhists.

The improvement of the razor started in the 19th Century. They start different techniques and attempt to make it safer. After that, they successfully made a safety razor in 1904 for wet shaving. Mr. King C, Gillette, with the help of another person named Mr. William Nickerson, a professor at Massachusetts institute of technology.

Initially, the razor expanded word wide when it was designated as a supply for the war. The Government of the United States of America purchased around 3.5 million razors and 36 million spare blades. The razor traveled to many countries after Japan thought of the military officers.

1. Expansion and Development of The Kamisori (Razor) For Wet Shaving

The MEIJI ERA ( 1868 – 1912) mainly and openly razor was started using in the market. The foreign-made razors were introduced in Japan after western civilization. Some razors were from Solingen in Germany, and others were from Sheffield in England.

After world war 1, which was during 1914 – 1918, the Gillette T-Shape razor started being imported and started being used for wet shaves. After that, the T-Shape safety replaced the open razor. The Two Pows of the German army stayed in Japan and started making safety razors. They were succeeded by Nihon Anzen Kamisori Kyogyo K.K. ( Japan Safety Razor Industries, later changed to Feather Anzen Kamisori K.K.- Feather Safety Razor Company).

The start of the China incident in 1937 led Japan to the war in the Pacific and also in world war 2. After the war, the Japanese government banned all kinds of razors. The government of Japan also banned the production of open razors. However, the safety razors were excluded from this restriction. With this restriction, safety razors monopolize the market. The share of the market reaches 80%. The safety razor manufacturers earned too much profit during the ban.

Before the world war, Gillette was represented by Muller’s phips and sellers. The razor of Gillette was used for wet shaving. The Valet in English had been replaced after that by Muller or Maruzen as the import agent. The sanpo assisted Muruzen in getting the agency by offering them “ yusen gaika” ( a kind of import license), which could only be obtained at a premium.

The success of Schick in Japan

There are many reasons behind the success of Schick. It is aggressively expanding its business and sales. They open outlets in different places by giving the rights to Hattori and Sanpo. The Schick razor was shaved smoothly and also worked effectively for wet shaves. After working aggressively on outlets, they introduced their own stainless steel blades and took one step ahead of the other manufacturers. They also spend a substantial amount of money to have a large campaign.

Gillette could not increase their sales after world war 2 in Japan because they were putting too much confidence in the sale of their product. They are confined and relayed in T-shape razors and carbon steel blades. Gillette also expanded its wholesale network.

They have 150 new wholesalers, but the results are still the same as before the increase in the network of wholesalers. The reason behind the decrease in the sale of Gillette was that they were busy enjoying the success of the business but failed to forecast the new market trends. And the consumers want something new. After that, the Japanese are moving with new trends.

The competition evaluation is based on five years, from 1971 to 1975. Schick did not expand the wholesale network. But in 1971, Gillette tried to recover its share in the market by introducing the twin-blade GII razor. It could also be used for a wet shave.

Schick also introduced twin blades with the name of the SII razor. During this period, Feather and Wilkinson dropped the sale due to low market demand for double-edge T-Shape razors l. Schick increased his market share from 37.6% to 59.17% in the period.

The second stage was based on 1976 to 1980. During this period, its share of the market increased by Schick from 63.6% to 69.8%. Gillette still decreased its market share also Feather and Wilkinson by 2%. Schick surpassed all categories of manufacturers.

After the new razor for wet shaving entered the international market with the name BIC in France, it was a disposable razor. It works very smoothly for all kinds of shaves, including wet shaves. This re-active the market in a new way.

Market Maturity About Use Razor For Wet Shave

It takes some time with the saturation of merchandise. The total annual turnover for razor products is around 220 million dollars. Recently new products have been introduced in the market. High-quality disposable razors are in demand. It is available for males and females for wet shaving. It is very easy to carry as compared to taking spare blades.