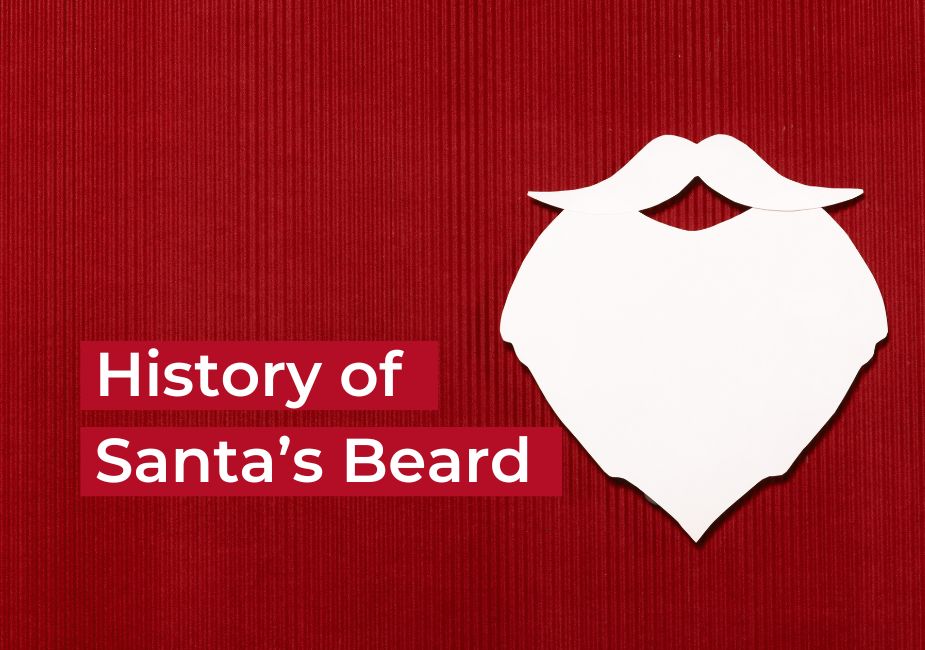 A lot is written about the appearance of Santa. This is how many of us have a common global image of him. Santa’s appearance indicates red robes with a long white beard while he has a cuddly belly. Not much is written about why he has a beard though. You will be surprised to know that the reason Santa has facial fur is theological. Christmas is just around the corner and Santa is here too. Do you know how Santa beard came into being? Or why does he have a beard? Read on to find out more.

You will not be surprised to know that the story of Santa goes back many centuries. The initial idea of Santa Claus came from a monk named St. Nicholas. He was popular for having a lot of facial hair while he had a charitable nature. The best thing about him was that he kept distributing his wealth to the poor. However, one day Coca Cola’s marketing team roped him in for a promotional campaign. It helped him gain a popular and universal image of Santa. His image and popularity will not go down anytime soon.

The white beard and red outfit make up the most popular image of Santa today. However, the credit goes to the famous soft drink company, Coca-Cola. As they hired him for a popular campaign in 1931, Santa became a sensation overnight. Everyone could see him in the advertisements for Christmas and he became a prominent Christmas figure. Even though he wasn’t very realistic but holds symbolic meaning to it.

The illustrator of Coca-Cola, Haddon Sundlom, developed some advertising images of him. If we talk about his inspiration comes from a poem named “A Visit from St. Nicholas.” Coca-Cola advertised the Santa figure and his creations from 1931-1964. It is majorly due to the images from the company that we can have an image of Santa.

Times have changed and Santa has become more modernized. The only thing that remained unchanged is his white long beard. His beard has become significant due to the Christmas season and holidays. Surely, it is not going to change anytime soon, since beards are becoming popular among people of all ages.

Santa is always depicted with a beard and there is a reason behind it. Saint Nicholas was originally a Greek-Turkish bishop in the fourth century. We are in the realm of a beard Theology. During that century many tenets of Christianity were having a controversy with Ecumenical councils. There was a wide range of divisions between the churches and the western side of Rome.

One of the major controversies going on between these two parties was the beard. The Eastern Church thought that clerics must grow a beard that resembles Christ. It was to respect the Old Testament Law. However, the Western Church believed that one shouldn’t keep a beard. The ones who have a beard can get it shaved to show humility.

Many church fathers like Augustine of Hippo and Clement of Alexandria, strongly promoted the beard.  Clement wrote three different books to emphasize the importance of the beard. The majority of the chapters argued that men should keep the growth of facial and body hair natural.

Some of the people from the church even believed that using a razor on the beard is womanly. Even though it gives a fine effect but it doesn’t seem very appropriate. Women should grow their locks and take care of their looks carefully. While a man is adorned with a beard. No doubt a hairy chest is an attribute of manhood and a symbol of strength. This is the reason most men like to keep a beard since old times.

The beard of Santa is completely natural. It is not bleached but is white. He has become a famous figure that is associated with Christmas. His hair on the beard is 12 cm long. According to many stories, he kept a balanced diet to improve the quality of his hair.

As he was charitable, he used to help the poor passionately. He used to distribute gifts in the form of gold coins. You will be surprised to know that he gave a bag of coins to a man who couldn’t afford to have his daughters married. He is respected and known among each generation even today.

The Most Famous Legend of Saint Nicholas

A man and his three daughters lived in Myra. They had financial issues and the man had no money to get his daughters married. Without a dowry, the girls couldn’t think about getting married. St Nicolas (our famous Santa) was the bishop of the same town. He was generous and wanted to help this family without making himself popular.

In the secret of the night, he visited the man and gave him a bag full of coins. This bag of coins helped him marry his daughters with ease. Surprisingly this man was curious to know more about this generous Santa. He stayed up all night to catch a glimpse of Santa.

As Saint brought a bag of coins for the third time the youngster’s daughter caught the Bishop. Santa asked her to keep his identity hidden from everyone else. This is how he became one of the most famous saints all over Europe. There is no doubt that the reputation of Santa Clause remains memorable even after his death.

In the 19th century, every year the celebration of Christmas reached a new peak. Everyone was in search of a man with a red robe and a long beard. The shopping malls started advertising Santa on a new level. Many men dressed up as Santa and helped poor people. Even the Thanks Giving parade also features Santa regularly. This is how everyone has a certain image of Santa in their mind.

The history of Santa and his beard is entertaining for everyone. We hope you enjoyed reading this article.