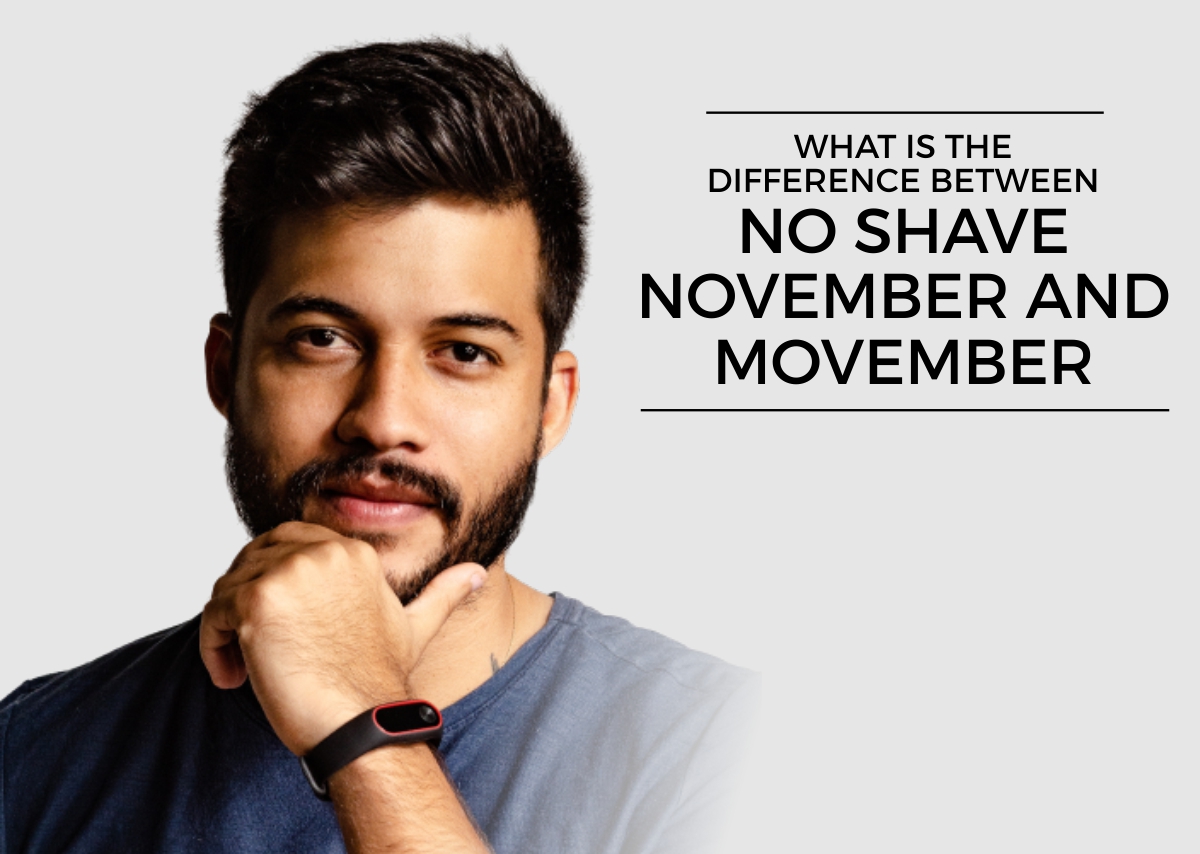 Everyone knows November is that time of year when brothers decide whether they have to grow out their beard or not. Yeah, it has become a ritual now for which men keep waiting all year long. It is like a bandwagon for them to join their officemates, class fellows, cousins, etc., in a brotastic bonding. Haven’t you heard of No Shave November or Movember? Mustaches or full beards? Prostate cancer or all Men’s Health issues?  Do you know the difference between No Shave November and Movember?

If you aren’t aware of these yet, how come you are supposed to choose which campaign to follow? Then let’s begin and learn what these are all about.

Difference between No shave November and Movember

During November, every year, a phenomenon starts to spread throughout the world, and that is No shave November and Movember. These two movements are very similar yet very distinct men’s awareness movements that are working amazingly.

Many people assume these two terms to be the same by mistake. But they are both very unique and distinct programs.  The core mission of both programs is to raise some great awareness for men’s health issues.

Back in 2003, two friends named Travis Garone and Luke Slattery met in a club in Melbourne, Australia. While discussing everyday problems, they got to know that one of their friend’s mother was currently battling breast cancer. That battle- story gave them a motivation to start their foundation. The basic idea behind it was to assistand raise awareness about men’s health causes.

They wanted to specialize in raising a movement for a men’s specific disease – prostate cancer. From that day onwards, the Movember Foundation now helps to generate awareness for testicular cancer. Moreover, it works for mental health problems and suicide prevention. Then they started searching for a suitable name for the foundation.

As in Australia, they spell Mustache, different from – Moustache. So, they combined both the words ‘Moustache’ and ‘November’ to create a name, i.e., formally, ‘Movember.’

How Movember began and where it stands now?

Initially, they requested 30 of their close friends to grow a mustache in November. And their friends did it, of course, the first list of mustache growers is mentioned on their website. Growing with leaps and bounds, now this foundation is working in several countries around the world. The impact is huge made by the Movember Foundation. It helped approx. over 1,200 projects in funding across several countries around the world which opened several dimensions. You can get an idea of their achievement by the fact that in 2015 alone this foundation raised $16 million dollars in the US. Furthermore, 76% of the funds from the total amount went directly to men’s health programs.

How to Participate in Movember

You don’t need to have any particular set Movember rules to participate in the movement. You just have to follow some of the do’s, and don’ts as mentioned below.

Week 1: From the beginning of November, you have to completely shave off all of your facial hair. It means you cannot have a beard or even a goatee. It can be a formal mustache, as outlined in the Movember Foundation’s website.

Week 2: You have to trim up your beard area, so only the mustache is prominent.

Week 3 – Week 5: Continually shave those areas around your mustache and let it grow. During these weeks, your mustache should be visible, so the people around you question out of curiosity.

And then, you can educate people about important men’s health issues, the entire campaign. It will ultimately help you in raising funds for the foundation.

Movember also focuses its charitable contributions on four different Men’s Health issues, i.e., prostate cancer, testicular cancer, mental health issues, and physical inactivity. The two most common cancers among men are Prostate and Testicular cancer. According to statistics, around one in four adults suffers from a problematic mental health state. At the same time, over half of the men do not fit into the specific criteria for physical activity. That’s why Movember has done an incredible job by raising around $650 million. This amount helped in funding more than 1,000 programs focusing on these four issues that affect men everywhere.

How No-Shave November began, and where it stands now?

No-Shave November is a charitable organization founded in 2009 by a Chicagoland family. The family had eight siblings who lost their father in 2007, fighting a battle with colon cancer. This foundation also created a massive impact on men all across the US and helped to raise over 2 million dollars to date. The core aim of the entire campaign is to make awareness by embracing our hair strands. Through this, one might understand the pain of cancer patients who lose their hair. It makes the Difference between No shave November and Movember quite evident.

How to Participate In No-Shave November?

No Shave November rules for participation are more comfortable to follow.

No Shave November meaning is to have a clean-shaven look, at the beginning of November, and that’s it. So, the difference between No Shave November and Movember is shaving and growing facial hair.

Moreover, No-Shave November also focuses its money and energy both on cancer research. They don’t only work for prostate and testicular but are open to all cancers. It has partnered with the famous American Cancer Society, Prevent Cancer Foundation, and renowned St. Jude Children’s Research Hospital to work far better together. Participants are required to donate the money for this cause, which they would have otherwise spend on grooming, like razors, and at the barbershop.

So What Are You Waiting For?

Now you know the Difference between No shave November and Movember. No matter what your cast and creed are and no matter what kind of beard you have, everyone should go and play their part in this campaign. If you are still confused, No Shave November rules are quite easy; go for it. When it comes to awareness you should not find any excuse to be a part of any of these causes. It doesn’t mean that you should also donate to these foundations. It can be just simply growing a beard or a mustache to create awareness.